Tough Decisions: who, what and how we help in the face of disaster relief

When natural disasters hit the headlines, we feel powerless to help yet compelled to act. The Trafigura Foundation, with its philanthropic purpose, is sometimes able to serve as a platform for Trafigura’s response to large natural disasters. Here, Vincent Faber, Foundation Director, and former CEO of Médecins Sans Frontières Switzerland, explains how hard decisions are made as to who and what receives support.

When a natural catastrophe occurs, the Foundation is the first port of call for employees wanting advice on how to help. As a company, we also believe in the role of corporations to act as good citizens and contribute in the face of disaster. However, given the myriad appeals around the world, we must adhere to a framework that guides our decision-making.

As we were finalising this article, we received the terrible news about the earthquake in Nepal on 25 April. The death toll and scale of its devastation is extremely sad and alarming – as is always the case in major natural disasters. As the Foundation doesn’t have the resources to address all catastrophes which, unfortunately, occur all too often, we have to lean on a clear policy outlining how, when, and where Trafigura can offer financial or practical assistance in times of crisis. These principles – which offer both guidance and flexibility – are established as follows:

In the case of Nepal, we are still assessing the situation to determine what the appropriate response may be. The Foundation is open, willing and able to mirror staff fundraising efforts, on a 1-for-1 matching basis.

Foundation Director Vincent Faber explains the rationale behind these principles: “Our approach needs to be pragmatic because we cannot respond to every disaster. We need clear guidelines, and one of the determining criteria for us is location: we will respond to a crisis in the countries where Puma Energy or Trafigura operate.” Having said that, the Foundation believes it is important to remain flexible and assesses situations on a case-by-case basis.

Haiti is a notable example of a country where the Foundation provided support without there being any business operations. With the earthquake of 2010, where the death toll reached 250,000, it was clear that we were facing a massive catastrophe with a global resonance where people really wanted to help. As Vincent states: “For Haiti, we collected individual staff donations, which were tracked and put into an account. These were matched by the company, and the resulting USD 130,000 was given to trusted implementing partners, having already a strong expertise of Haiti, on the ground. This type of ‘ad-hoc’ response is a creative solution that meets the needs of staff to urgently do something.”

“We are emotionally compelled to act in the first stages of a disaster, but this is typically when money pours in. It’s when the crisis is no longer news that funds are critically needed. That’s why we channel our donations towards long-term rehabilitation efforts.”

Guidelines are also in place as to how our donated funds are used: cash donations are typically used to support social and economic development and long-term rehabilitation efforts. Also, the Foundation doesn’t just provide financial aid; sometimes, practical support is offered too. Events such as the floods in Namibia (2011) or the earthquake in Chile (2010) require emergency helicopters and transportation, all of which need gallons of fuel. Trafigura and Puma Energy leverage their core business to offering fuel donations, which are just as valid as cash gifts.

Our approach to giving is aligned with Trafigura’s business philosophy and based on deep knowledge within the Foundation team. Indeed, the ability to make informed decisions on how funds should be allocated is rooted in the humanitarian backgrounds of the Trafigura Foundation team, in particular Vincent Faber’s.

Prior to joining the Trafigura Foundation, Vincent spent many years working in humanitarian roles in the world’s most troubled spots. Present in Romania after the fall of Ceausescu in 1990, posted to Sarajevo during the civil war of 1992, and then to the cholera-ridden emergency camps in Rwanda following the genocide, Vincent later took up the role of CEO of Médecins Sans Frontières Switzerland in 1998. This kind of first-hand experience of major humanitarian disasters makes him well-placed to shape Trafigura’s approach to emergencies.

“My previous roles opened my eyes to crisis management. I quickly learned that, although we are emotionally compelled to act in the first stages of a disaster, this is often when immediate financial or logistical needs are met. It’s when the crisis is no longer evening news that funds are critically needed. That’s why we prefer to channel our donations towards essential long-term rehabilitation and reconstruction efforts, and also why we may wait some months before releasing a donation, as we’re waiting for this work to get underway.” 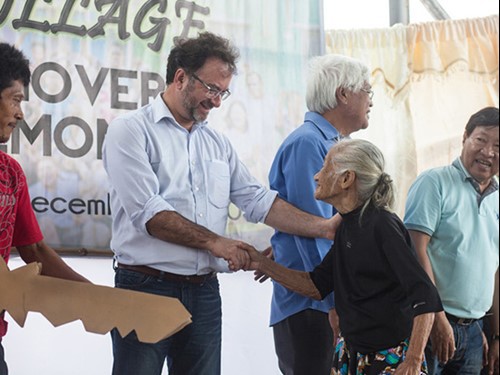 Enabling staff to give

Based on these insights, the Foundation strives to provide a clear, yet flexible response to catastrophes. We are pleased to see employees getting in touch with the desire and confidence to give, using the Foundation as a channel.

The company’s seasonal e-cards scheme, launched in 2013, generated an encouraging response to Typhoon Haiyan in the Philippines. For every e-card sent, Trafigura put USD 10 in a ‘pot’ that went towards the cause. Over USD 100,000 was generated company-wide. These funds helped to rebuild 30 homes for families in the Philippines, creating a veritable new village solely funded by Trafigura.

This heart-warming story shows how a simple click in an office on one side of the world can rebuild a whole community in another corner of the planet. Learn more by watching Vincent’s video here.

In 2014, the Trafigura’s Seasonal Cards appeal raised USD 90,000, earmarked for the Ebola outbreak. At this time, it is envisaged that the funds will be used to help train a new generation of nurses for the medical community, as thousands of paramedics lost their lives during the epidemic. These funds will create jobs, ensure future medical care, and tackle the long-term but little-known consequence of the crisis.