What if there was a way to ease the stresses of modern life, but it was by doing more, not less? As working professionals, we’re all busy with careers and commitments, but for those in the Charity Committees, it’s the satisfaction of giving to others that puts everything into perspective. Joy is high on the agenda this spring with our five Charity Committee updates: a Uruguayan children’s charity celebrated as they moved out of an old shipping container into new premises refurbished by Trafigura. The Athens team brought smiles to faces as they drummed up arts tickets for a whole village of children. Johannesburg were moved by festivities at a newly renovated school, and youths in the USA saw a bright future at Trafigura’s Burnside terminal. 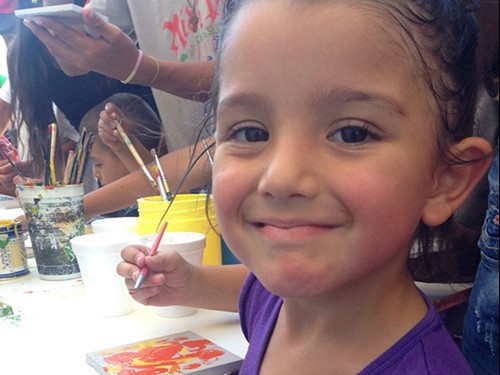 Unidos is a local NGO that provides after-school activities and homework support to children in highly deprived areas of Montevideo. Until recently, the organisation worked out of an old shipping container – an unwelcoming environment for the children, and uninspiring for the teachers. It is this NGO that Trafigura’s local Charity Committee chose to support in 2014. Unidos was recently given official children’s charity status by the government, and with this came new premises, which were subsequently refurbished by Trafigura. In March 2015, the new centre was inaugurated, marked by vibrant and heartfelt celebrations from the children, their families, volunteers, and Trafigura staff. A mass took place to mark the opening of the new location, followed by a ribbon-cutting ceremony, a shared lunch and a fun afternoon playing with the children. 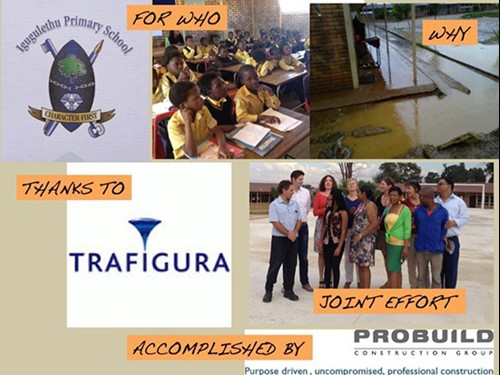 For true impact in action, Johannesburg’s commitment to the ailing local Igugulethu school is a testament to perseverance and passion. The Johannesburg team secured a large budget to extensively refurbish what has been the biggest undertaking yet of any Trafigura Charity Committee. Works started on the school in the autumn of 2014 and in March 2015, pupils visited the local Trafigura offices, where they sang for the staff as a way of thanking them for their sponsorship. They then visited the offices, had fun sitting in the boardroom and enjoying a buffet lunch. During the month, staff also unveiled new benches and tables for the school grounds, inscribed with motivational messages. Seeing the school rejuvenated from desperate conditions has been an emotional and moving project for the staff, matched in gratitude by the children and the school director.

Burnside: New Orleans youth get a glimpse of a productive future 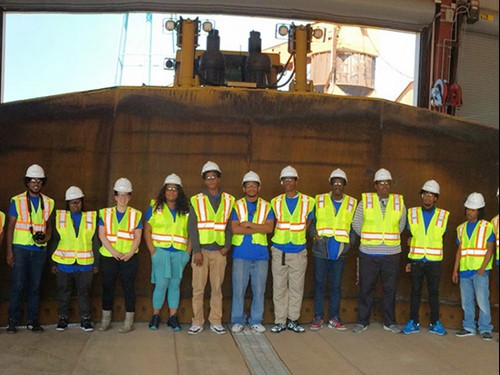 On 17 March 2015, Impala staff in Burnside, Louisiana, welcomed students from the Youth Empowerment Project’s (YEP) Trafigura Work & Learn Centre in New Orleans. The Centre has been sponsored by the Trafigura Foundation for the last three years. In a prime example of how the Foundation’s programmes foster interaction with local businesses, youngsters from the Centre visited the Trafigura terminal at Burnside, a busy handling area for bulk commodities such as coal, bauxite and alumina. Set on the Mississippi River, the facility has recently been refurbished and is on its way to becoming one of the largest sites of its kind in the USA. It was at this impressive facility that the young adults could see the terminal in action, hear how various workers had secured their current jobs, and understand the types of careers available. In turn, terminal staff who may have been unaware of the Foundation’s engagement with the Trafigura Work & Learn Centre gained insights into the work of the Foundation and discussed ways to get involved. Quarterly visits are now planned to the Terminal and staff are volunteering for mock interviews so that Work & Learn Centre youths can get an idea of what these ‘real world’ scenarios are like.

Click here to read about how the YEP team were invited to an event at the White House.

“We are working to strengthen our ties and involvement with the Youth Empowerment Project on behalf of the Foundation. We’ll continue to participate and motivate these challenged youths in hopes that continued involvement with the local Trafigura and Impala teams will prove an example of what the combination of opportunity, hard work, a continuous improvement approach and perseverance can truly achieve.”

This March saw the Geneva Charity Committee unveil its Charity of the Year for 2015. The chosen cause is ‘Le Foyer’, a local organisation committed to helping women and children who are victims of domestic violence. The Committee will be organising fundraising events and volunteering opportunities throughout the year, and Le Foyer will be presented with a financial grant from the Foundation. The Committee’s first event kicked off on Monday 20th April with a bake sale organised in the Geneva offices.

For several years, the Athens Charity Committee has been committed to two local causes: a local children’s hostel, the Eliza House, and SOS Children’s Villages, a global organisation that recreates real ‘homes’ for children who are homeless or have been abandoned or orphaned. Both organisations’ needs are particularly significant right now, as Greece continues to suffer economically, affecting thousands of families and children. The Athens team regularly help out at the Village but recently increased their support to bring extra joy to the kids’ lives. In a creative move, the Committee forged a collaboration with the Athens-based Onassis Cultural Centre (OCC), a contemporary arts space with an emphasis on educating children. The team‘s objective was for all 75 children at the Village and the Eliza House to attend a performance or educational program at the OCC. The initiative has been a success so far, with children enjoying activities around architecture, music and theatre. The OCC also hosted a special appeal, requesting ‘Friends of the Centre’ to donate points when buying tickets; this sparked an enormous response and generated enough arts tickets for all the children over the coming year.